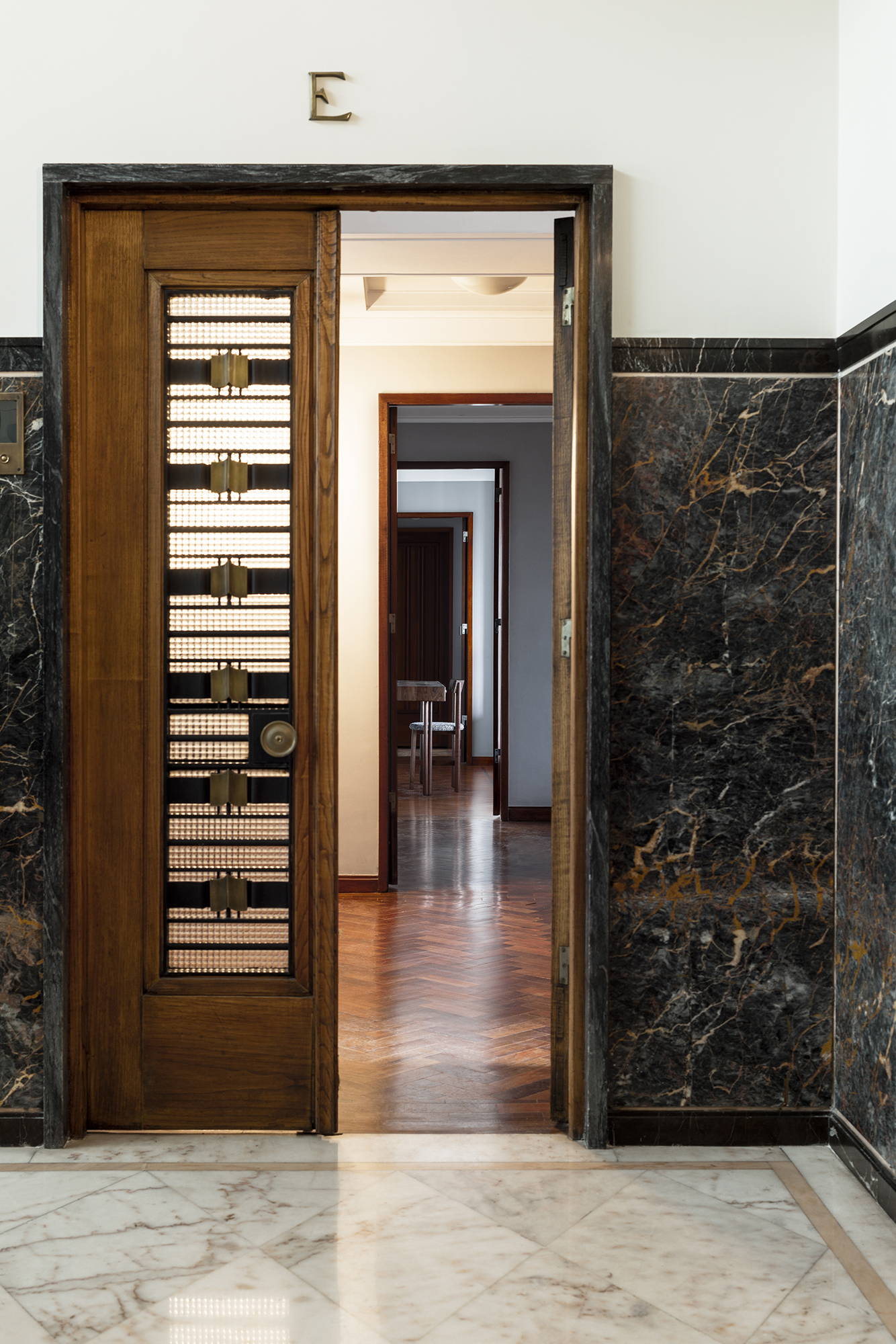 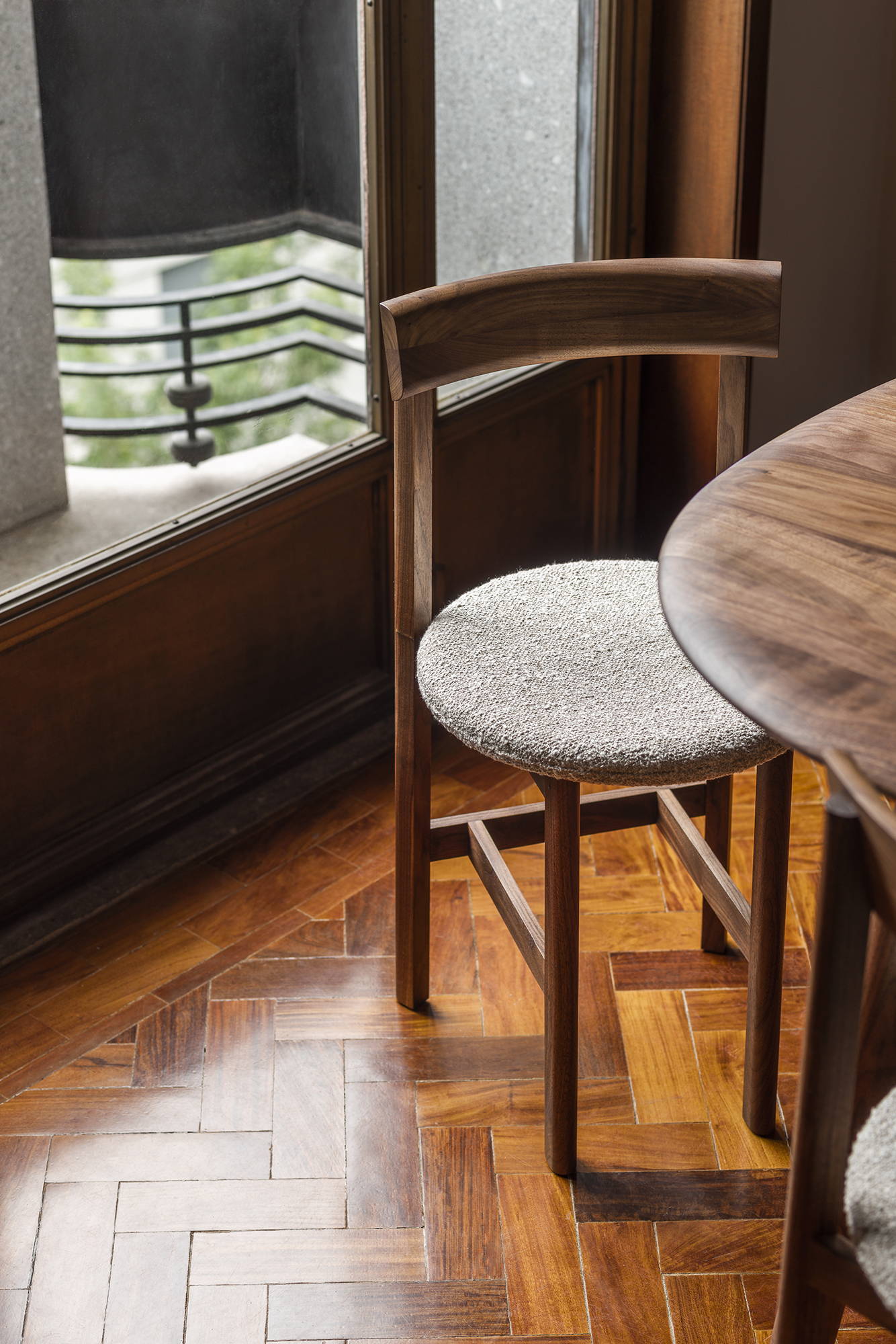 Palácio do Comércio lives as a shining example of the best of Portuguese architecture and craftsmanship.

De La Espada Residencies are an opportunity to experience the De La Espada lifestyle first hand in an immersive, welcoming environment. Our residencies have engaged visitors not only with design, but art, music, theatre, and discussion. For 2021, when we find ourselves still grappling with a pandemic, we are hosting a quieter version designed for virtual exploration.

Our 2021 residency is located in Porto, a city close to our hearts as it is the hometown of De La Espada co-founder Luis De Oliveira and is less than an hour’s drive from the De La Espada factory so is a familiar stomping ground for our team. We have chosen a very special apartment in the Palácio do Comércio, a historic building with a rich history and, through photography and video, invite guests to experience this remarkable piece of architecture and the imagined De La Espada home we have created within it.

Palácio do Comércio feels like time travel with its layers of history, creativity and life. Built in the mid-twentieth century for Delfim Ferreira, a prominent Portuguese entrepreneur, it features spacious luxury apartments originally designed to accommodate both the inhabitants and their housekeepers. The building’s architects, Maria José Marques da Silva and David Moreira da Silva, poured generations of skill and knowledge into its creation, both through their own education and inherent talents and those passed to them from their fathers. Maria José’s father was José Marques da Silva, an architect credited with having shaped the face of Porto in the early twentieth century through his numerous landmark works including the São Bento Railway Station, an icon in Porto with its azulejo-tiled storytelling walls, and through his role as director of Escola de Belas Artes do Porto (Porto School of Fine Arts) where he taught several generations of architects. Maria José not only grew up in this influential family, but herself attended Escola de Belas Artes do Porto where she grew her knowledge further, and where she met her husband and collaborator, David Moreira da Silva. David was also raised in design and construction as the son of José Moreira da Silva, house builder and founder of the Porto Stonemasons´ Cooperative (Cooperativa dos Pedreiros Portuenses). 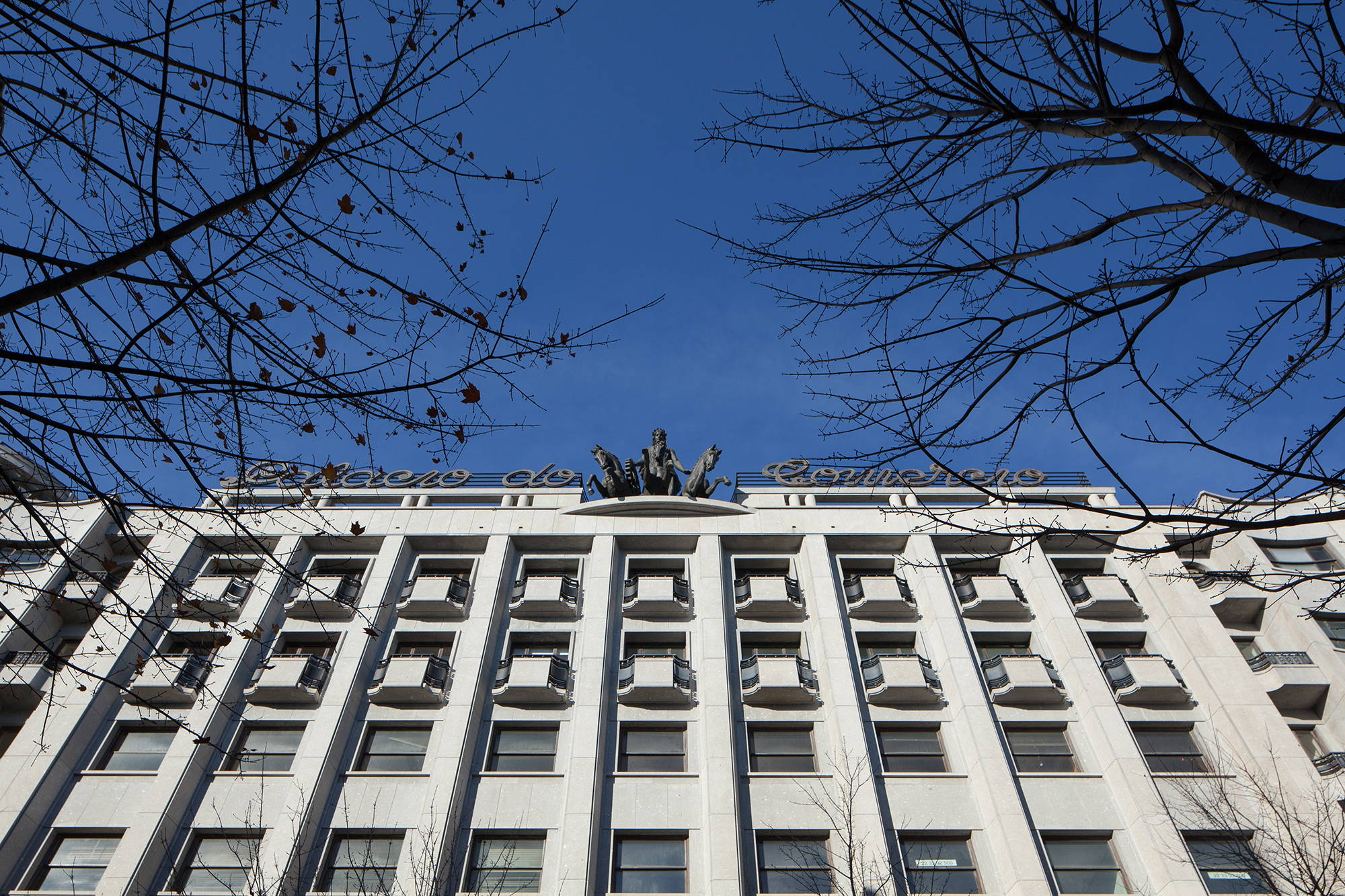 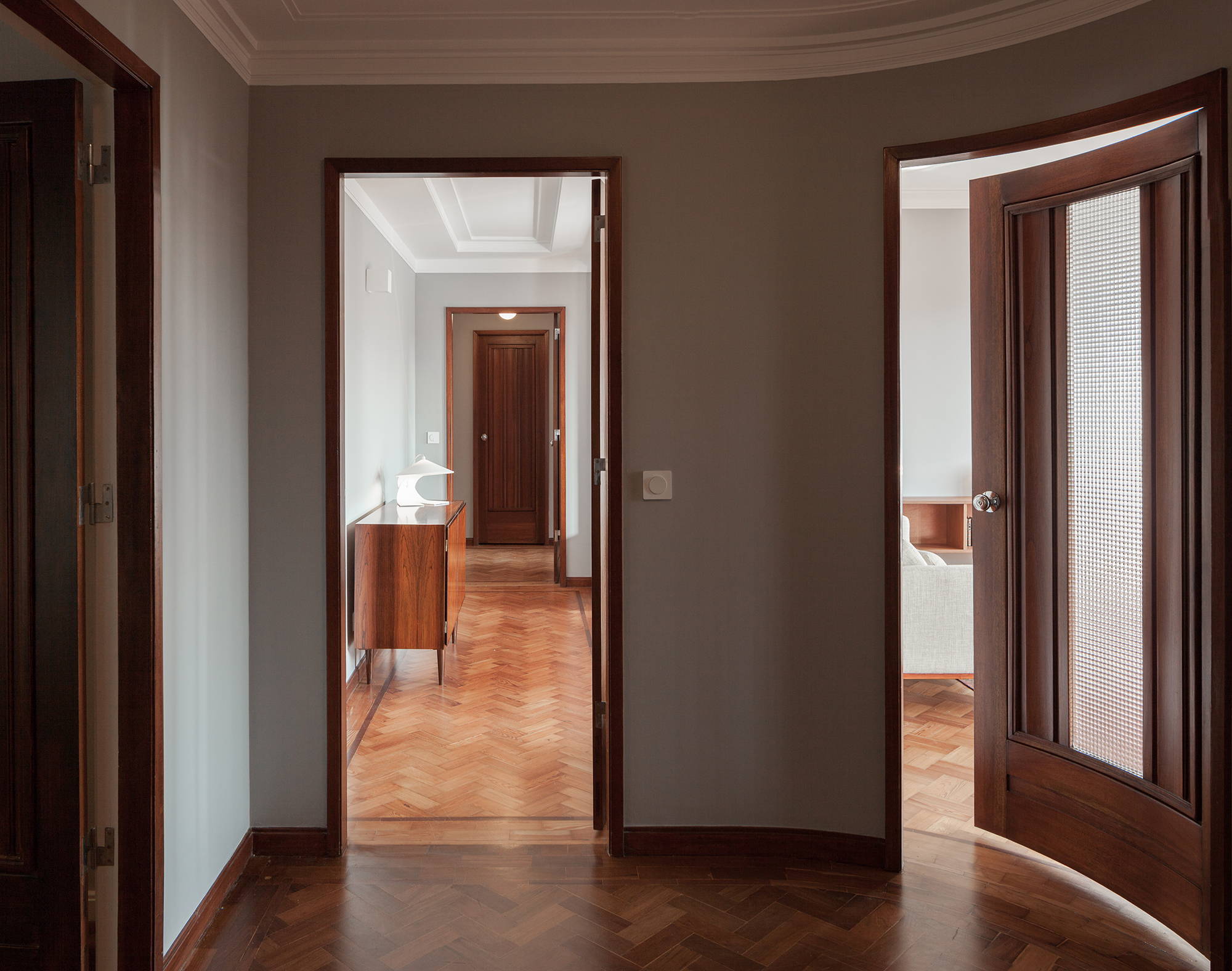 Maria José Marques da Silva and David Moreira da Silva are architects who, from the 1940s onwards, primarily worked in urban planning, and it is the diversity and depth of their expertise that makes their work so exceptional. This is reflected in Palácio do Comércio, where every scale was considered from subtle interior details, such as curved door and window frames, to the intricacies of the building’s construction and how it would sit on the street, in the neighbourhood and community. The couple, known for their attention to detail and quality of materials and construction, created a building that is expressive and varied yet cohesive and rigorously engineered, now considered one of the most exceptional buildings in the city.

When Atelier in.vitro, led by Joana Leandro Vasconcelos, renovated three of the Palácio do Comércio apartments on the 5th, 6th, and 7th floors between 2013 and 2016, they did so with sensitivity for the original design and discovered that many aspects of the apartments exceeded expectations when it came to longevity: “We kept the windows because they are simply marvellous and we couldn’t change them, and even the original frame wooden doors. Everything was in very good condition and very good woods so we felt no need to change it. I think it’s the characteristics of the building itself, the way it was designed and built — very good design, very good materials... we were working with a very good basis,” Joana explains. 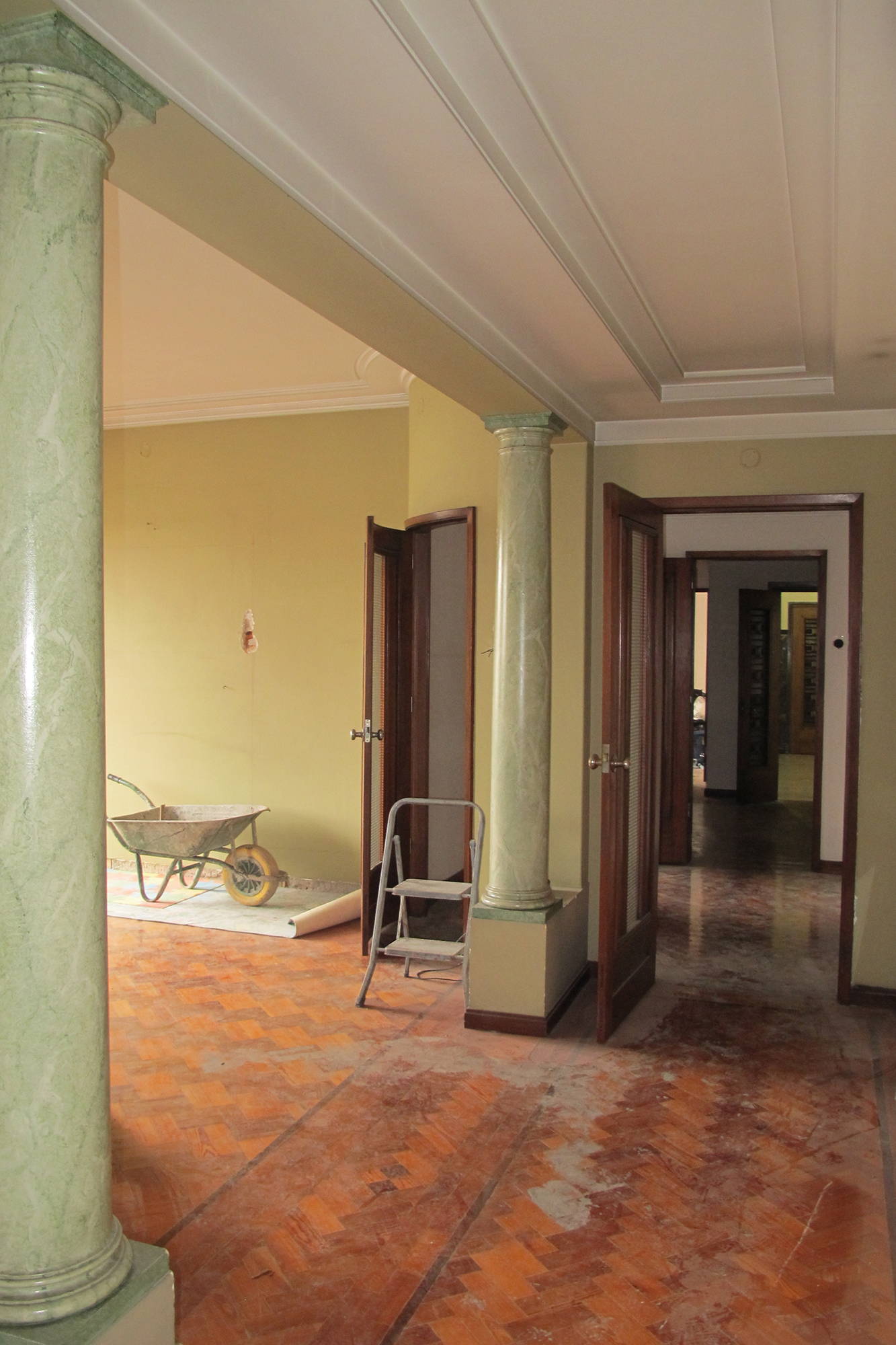 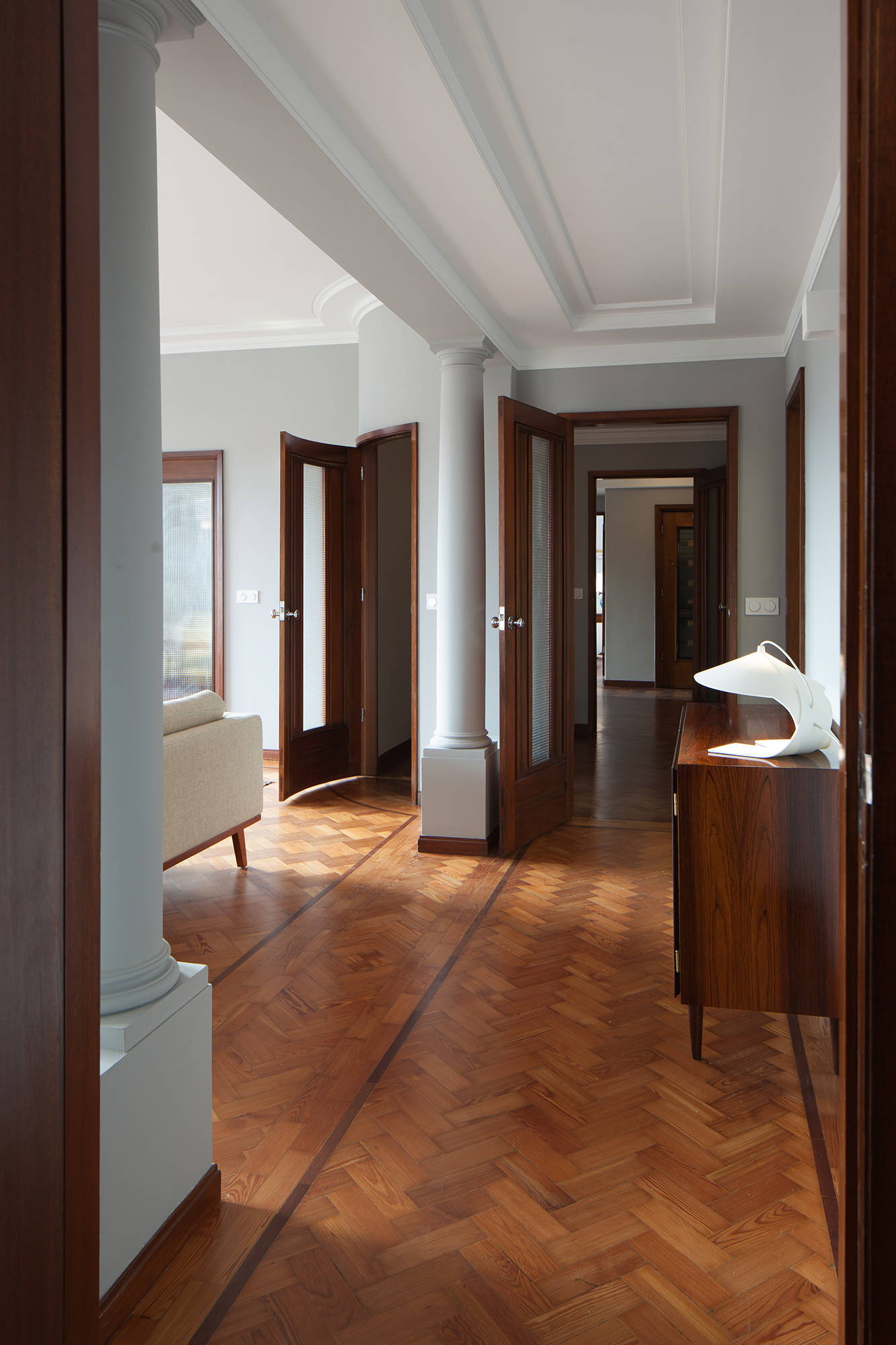 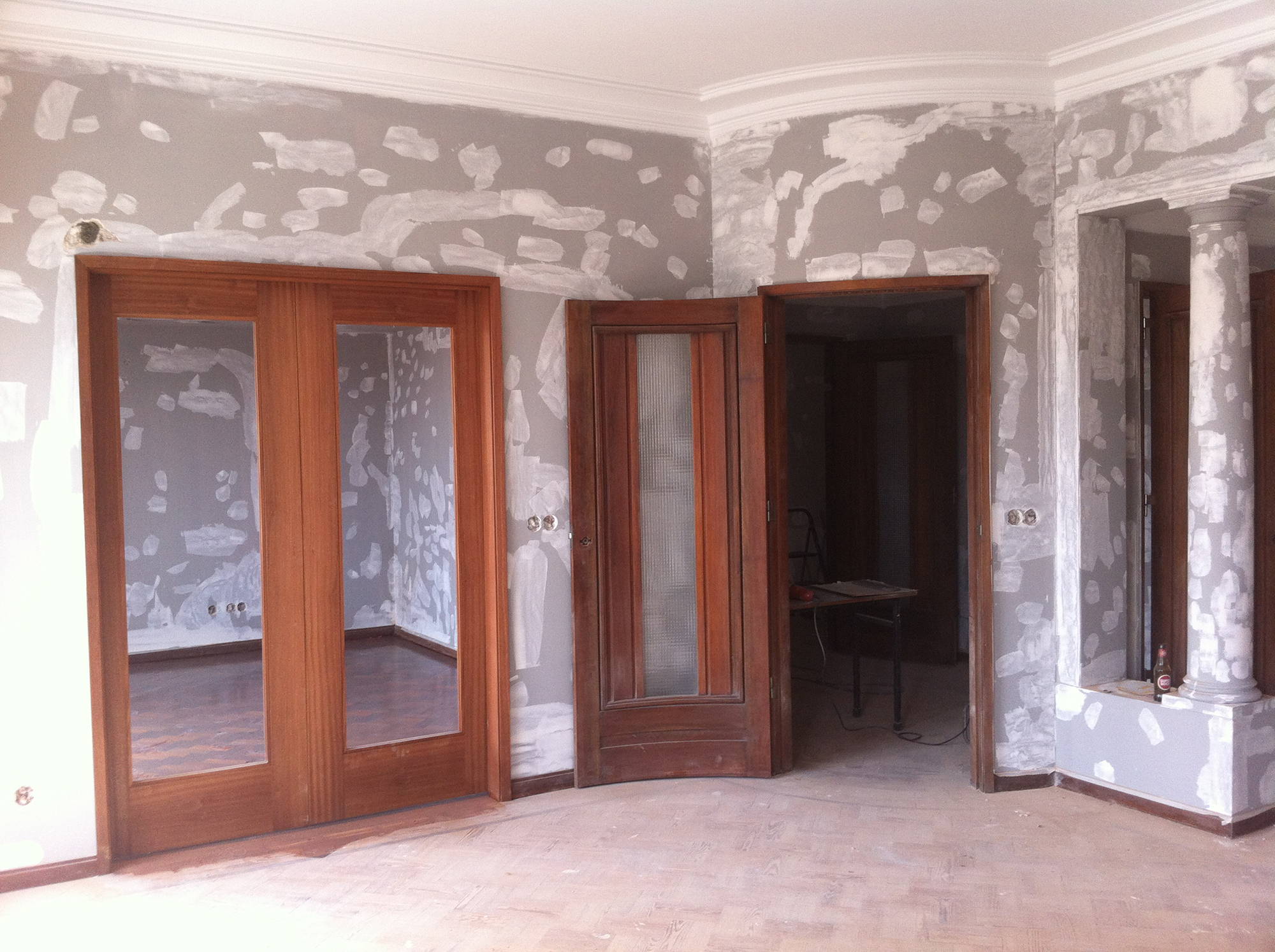 In the 5th floor apartment, home to our Porto Residency, the rich materials wrap the visitor in a relaxed refinement, from the abundant use of wood, to the swathes of marble and the intricate bronze detailing. These noble materials from 70 years ago sit beautifully with De La Espada furniture, more contemporary in form yet mirroring a similar quality of materials and Portuguese craft. As one explores the apartment, exciting details reveal themselves including curved door frames and, Joana’s favourite, a curved sash window with a copper frame in the front bedroom: “I love this window and the details of how it works and the fact that it still works perfectly — I think that’s amazing.”

When Joana and her team set out to renovate the apartments, their starting point was “studying the building, the story of the building, the construction system, materials... and we also tried to understand how it works and the state of conservation.” They needed to maintain the apartments’ function of private housing while ensuring they were suitable as rentable holiday accommodation. With deep respect for the original architects and the importance of the design in the history of Portuguese architecture, the award-winning Atelier in.vitro refreshed and embraced as much of the original as possible, while quietly introducing new elements that seem as if they were always there. Most of the materials were rehabilitated rather than replaced, with the wooden floors in the rooms and living rooms, the marble tiles, the mosaics and the ceramic elements in the bathrooms all original. 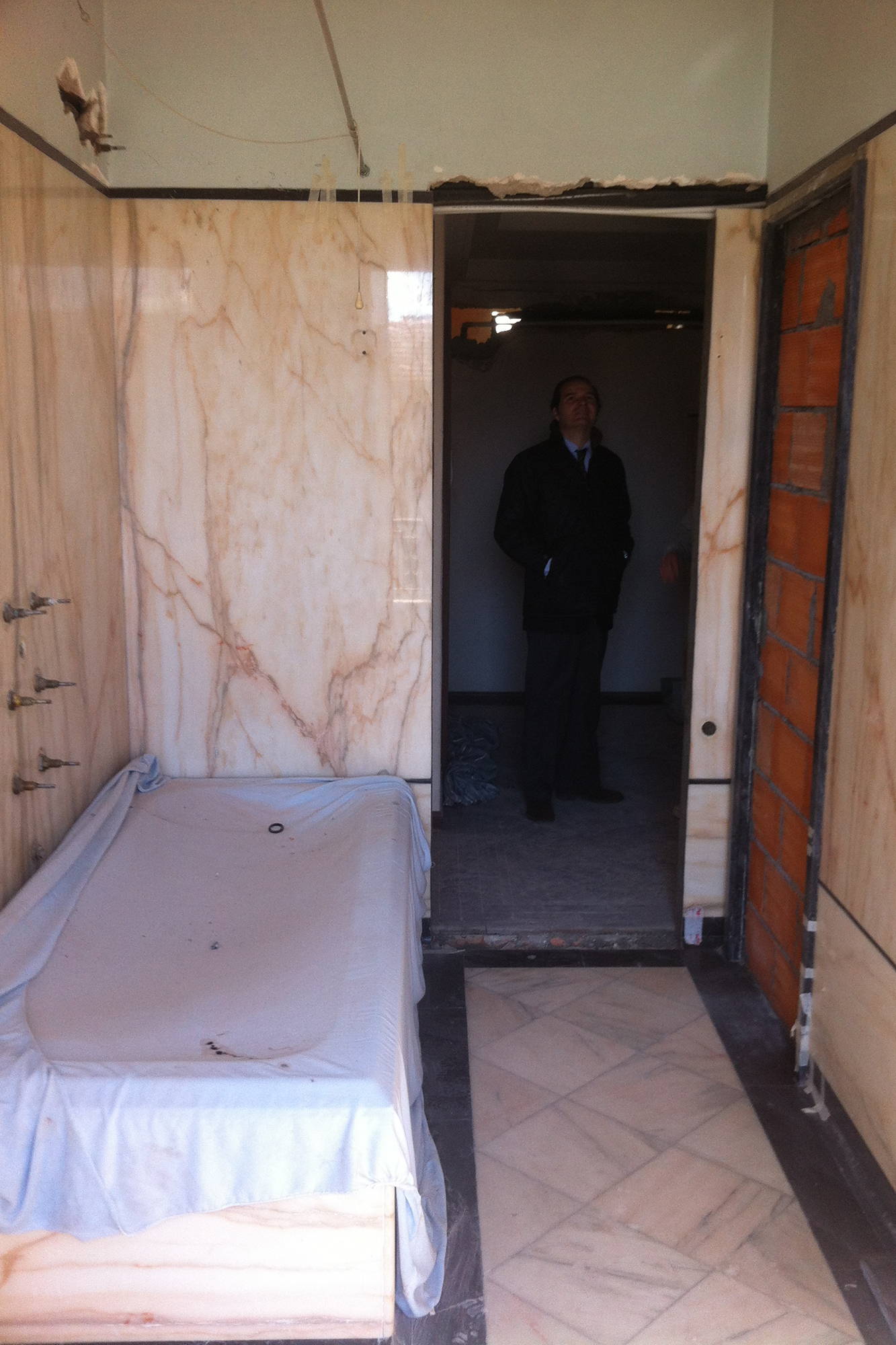 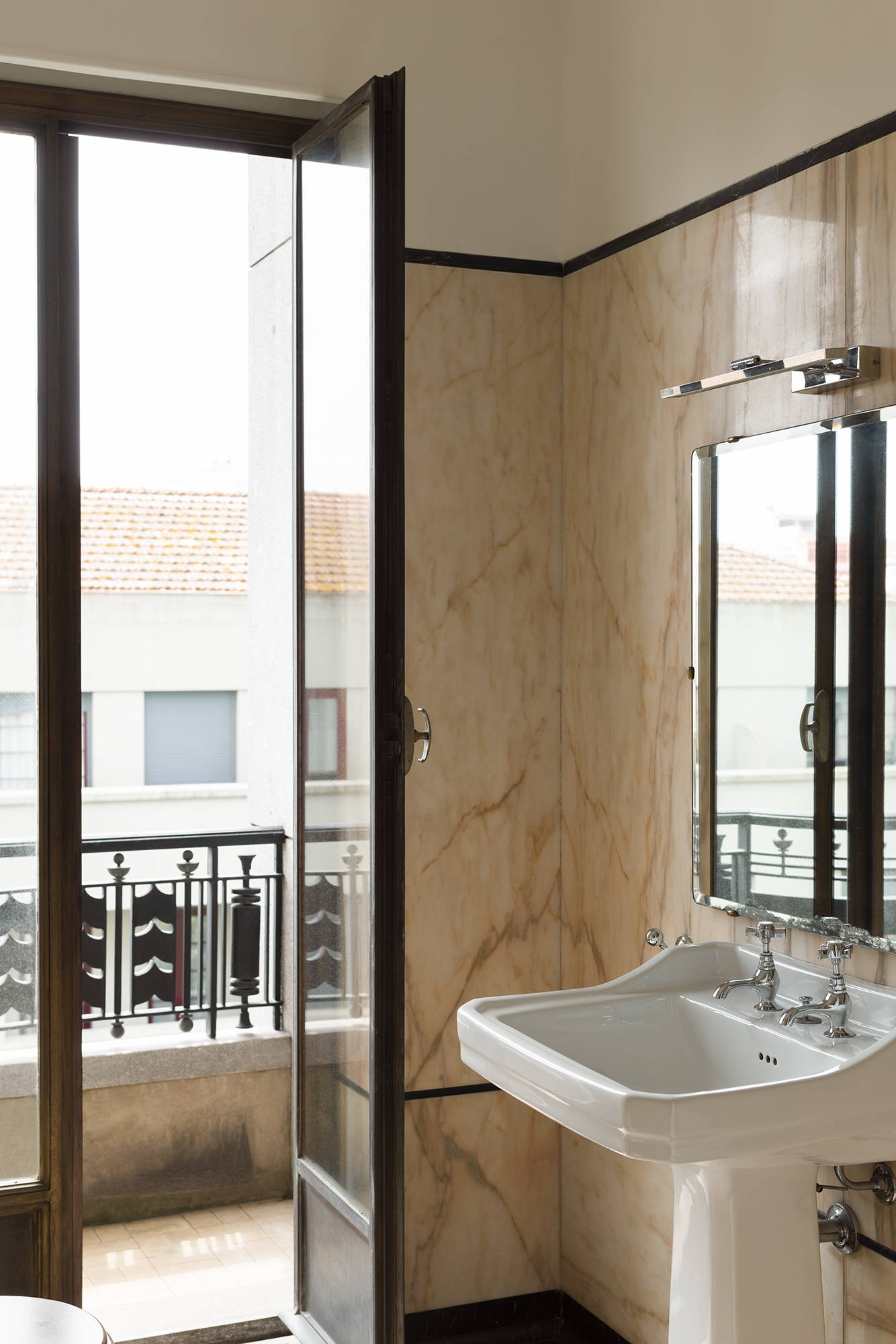 The apartments are long rectangular spaces with two fronts: the service compartments oriented toward the courtyard and the more noble rooms facing the street. This hierarchy is reflected in the materials palette, where premium woods were used in the street-facing rooms while painted woods were used in the service quarters. The renovation respected this separation, with every introduction of new materials taking this hierarchy into consideration.

Small changes were also made to the layout of the apartment to make it more suitable for modern living. “Now few people have [in-home staff] so we wanted to transform that bedroom and that area of the bathroom into a more noble bedroom that could be used by tourists,” Joana explains. This change allowed the bedrooms to include ensuite bathrooms. 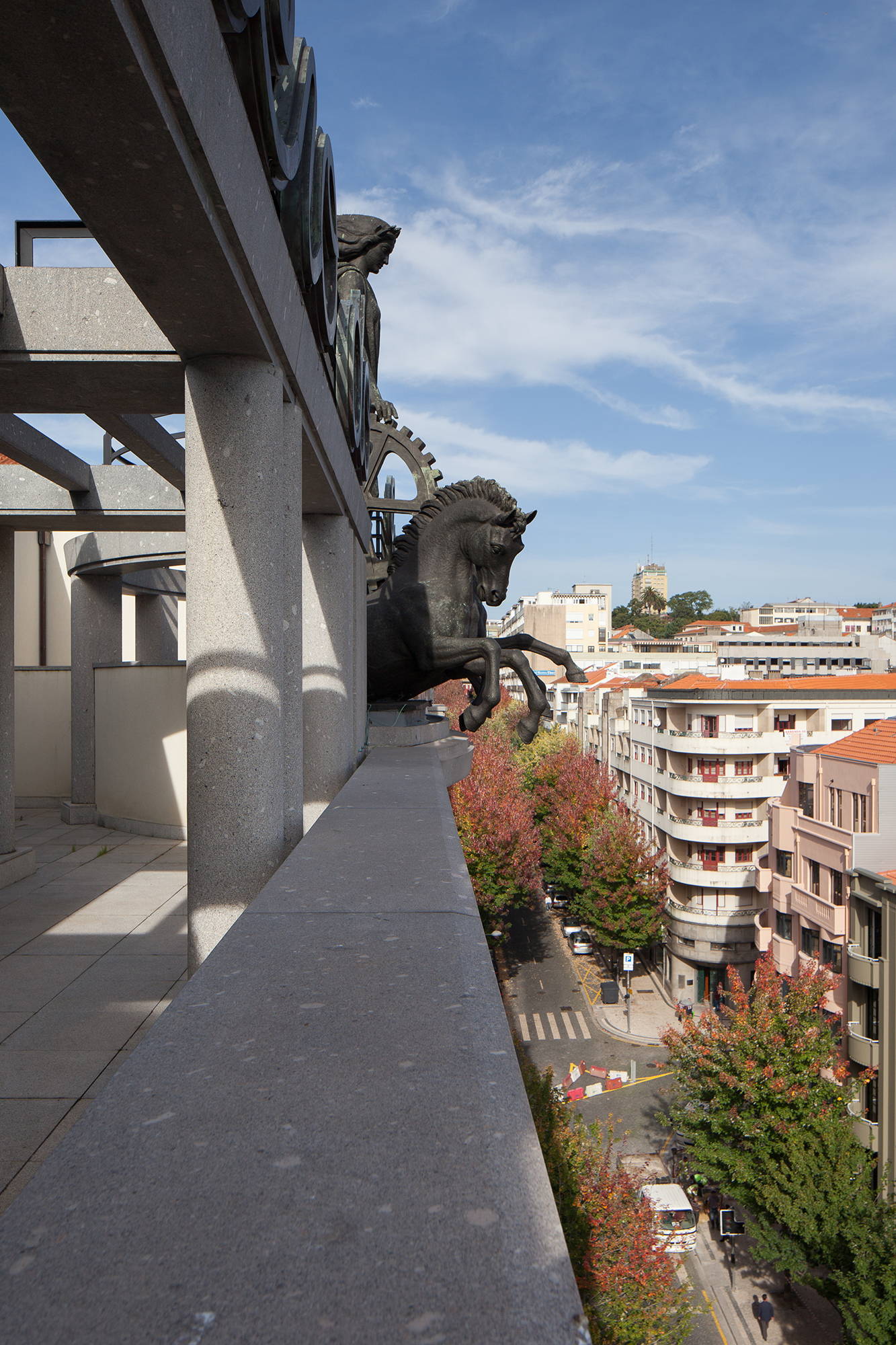 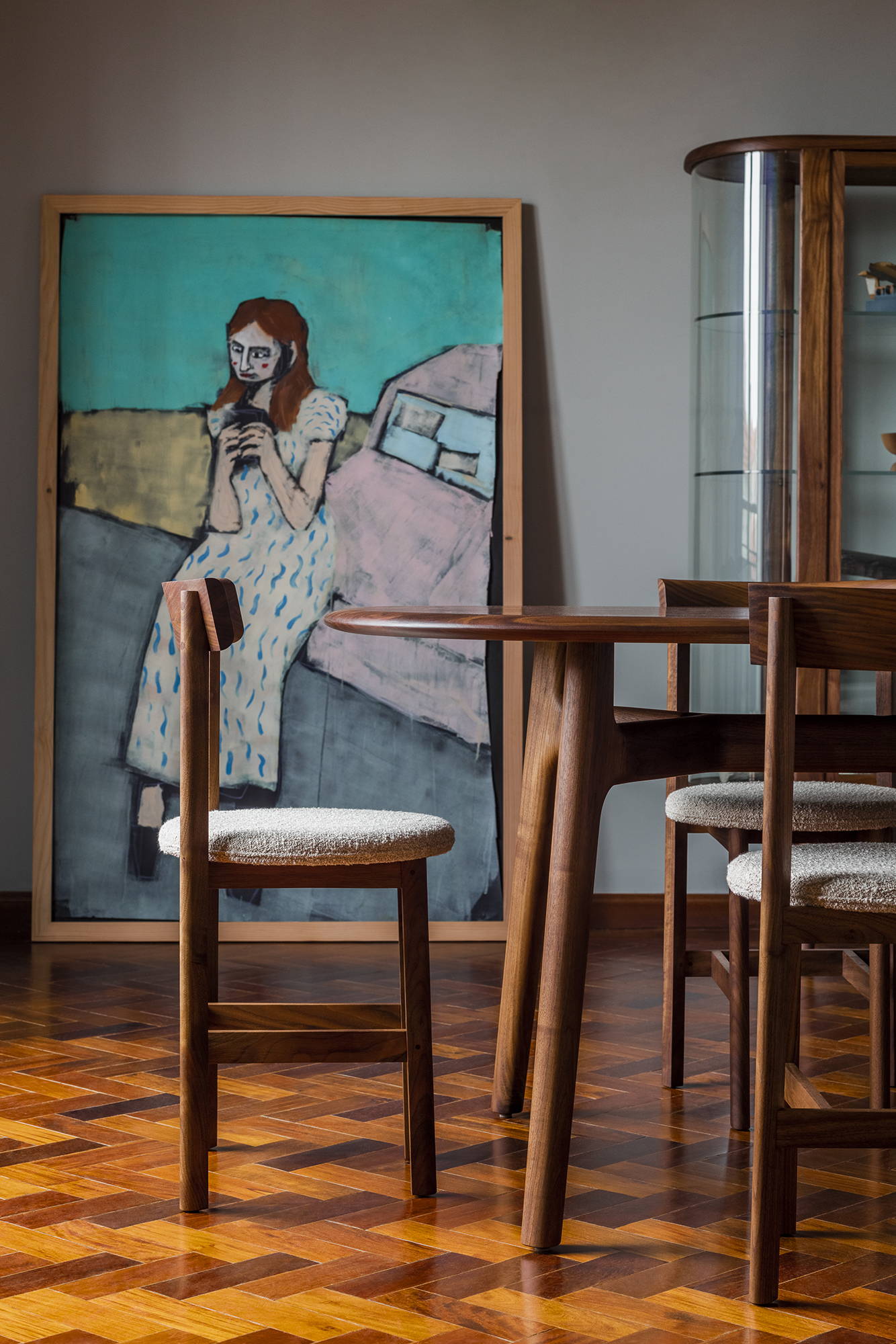 Palácio do Comércio remains one of the most well-known buildings in Porto and lives as a shining example of the best of Portuguese architecture and craftsmanship. It bears not only the history of its celebrated architects but the architects who influenced them, and the architecture firm that gently ushered the apartments into the 21st century with the depth of their history firmly intact. With its celebration of natural, robust materials and excellence in design and craft, it is the perfect backdrop for De La Espada furniture, a fitting element in the De La Espada lifestyle embracing the local and international, the historic and modern, the timeless and enduring.

Photo credit: Images 3, 4, 6 and 10 by José Campos
All other images by Carlos Teixeira